Have you walked through the streets of Fremantle lately?  At first, it may not seem obvious. Then you will notice the abundance of limestone. Everywhere you turn you will see limestone buildings of different eras and architectural styles. Along with limestone steps, limestone walls and limestone pathways as far as your eyes can see. 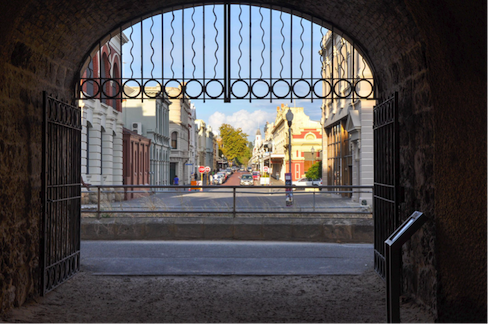 The Streets of Fremantle – View through the limestone Whalers Tunnel to High Street.

Fremantle a City Built on a Limestone hill

Picture back in 1829 as the first Swan River colonists safely navigate the dangerous, limestone rocky shores many a shipwreck before them failed. The limestone cliffs and reefs protecting the mouth of the Swan River from the sea extend underground into the hills. Because of the infertile sandy soil that covers the limestone hills the new colony almost didn’t get off the ground. It would take another 100 years and convict labour for the new settlement to become the City of Fremantle.

When gold was discovered in Western Australia there was a renewed urgency for a port to be built. The limestone reef was blasted and removed creating a channel to allow ships to safely enter the port. This provide much-needed protection from the rocky coastline.

With the new port came industries like ship building, saw mills, iron foundries, flour mills, leather tanneries, furniture making and breweries. This saw Fremantle rise from the barren limestone hills. Although now modernised, many of these founding industries still exist in 2018. For the industries that are no longer operating there is still evidence of the vital role they played. 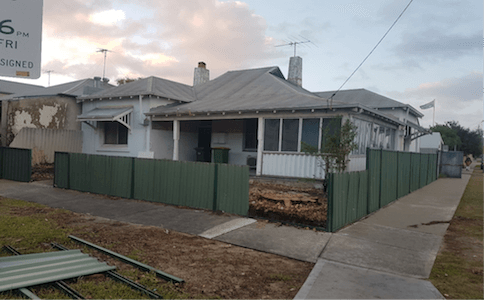 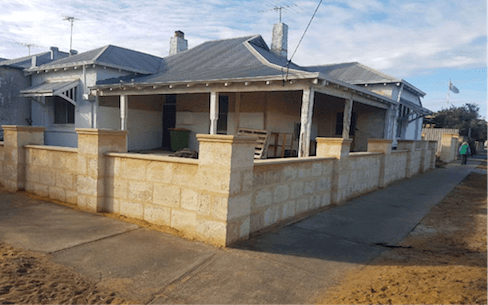 Here is a cottage that we are in the process of removing the dilapidated colour bond fence, which is definitely not an original feature of the property.

Now today, thanks to the Building and Planning processes put in place, the Heritage of Fremantle will be preserved for many years to come. The Roundhouse was the first building which opened in 1831. This still stands today as the oldest public building in Western Australia. Old cottages and homes are being lovingly restored by their owners using traditional materials and methods.

At Creative Limestone our blocklayers use natural limestone blocks cut from quarries by saws, instead of hand picks. The heavy limestone blocks are lifted into place using a bobcat and block lifter. The Limestone blocks are still joined together using a lime, based mortar. A mixture of old and new ensuring the history and heritage in the streets of Fremantle lives on.
If you have a home that is in need of a new limestone wall then click on our Contact Page. Mention you have read this blog and Paul will be in contact to discuss your needs.

Contact us now for a free quote on your project.

Creative Limestone is a WA owned and operated business with over twenty-five years’ experience in the construction of limestone walls, from Perth to Mandurah.